Norway is a Scandinavian country encompassing mountains, glaciers and deep coastal fjords. Oslo, the capital, is a city of green spaces and museums. Preserved 9th-century Viking ships are displayed at Oslo’s Viking Ship Museum. Bergen, with colorful wooden houses, is the starting point for cruises to the dramatic Sognefjord. Norway is also known for fishing, hiking and skiing, notably at Lillehammer’s Olympic resort.

Norway has a total area of 385,207 square kilometres (148,729 sq mi) and had a population of 5,425,270 in January 2022. The country shares a long eastern border with Sweden at a length of 1,619 km (1,006 mi). It is bordered by Finland and Russia to the northeast and the Skagerrak strait to the south, on the other side of which are Denmark and the United Kingdom. Norway has an extensive coastline, facing the North Atlantic Ocean and the Barents Sea. The maritime influence dominates Norway’s climate, with mild lowland temperatures on the sea coasts; the interior, while colder, is also a lot milder than areas elsewhere in the world on such northerly latitudes. Even during polar night in the north, temperatures above freezing are commonplace on the coastline. The maritime influence brings high rainfall and snowfall to some areas of the country. The Sognefjord or Sognefjorden, nicknamed the King of the Fjords, is the largest and deepest fjord in Norway. Located in Vestland county in Western Norway, it stretches 205 kilometres inland from the ocean to the small village of Skjolden in the municipality of Luster.

The innermost arm of the Sognefjorden is called the Lustrafjord, in the municipality of Luster. At its end is the village of Skjolden, which is an access point to Jotunheimen National Park. In earlier times, transport between Bergen and the Scandinavian inland was by boat between Bergen and Skjolden and from there on a simple road over the highlands (today Norwegian County Road 55), or by boat to Lærdal and through the mountain pass to Valdres (now European route E16).

Around the inner end of the fjord, three of Norway’s famous stave churches have survived: Kaupanger and Urnes (along the shoreline) and Borgund (30 km or 20 mi into the Lærdal valley).

The Sognefjord Span (power lines) crosses the fjord with a span of 4,597 metres (15,082 ft). This is the second largest span of power lines in the world. The fjord has become a tourist attraction with summer tourists being an important part of the local economy.

The city is warmer than most other places located on the same latitude, due to the warming effect of the Gulf Stream. Tromsø is even milder than places much farther south of it elsewhere in the world, such as on the Hudson Bay and in Far East Russia, with the warm-water current allowing for both relatively mild winters and tree growth in spite of its very high latitude. Preikestolen or Prekestolen is a tourist attraction in the municipality of Strand in Rogaland county, Norway. Preikestolen is a steep cliff which rises 604 metres above Lysefjorden. Atop the cliff, there is an almost flat top of approximately 25 by 25 metres.

The cliff was formed during the ice age, approximately 10,000 years ago, when the edges of the glacier reached the cliff. The water from the glacier froze in the crevices of the mountain and eventually broke off large, angular blocks, which were later carried away with the glacier. This is the cause of the angular shape of the plateau. Along the plateau itself there continues to be a deep crack. Due to these cracks, the plateau will at some point fall down, but all the geological investigations have revealed that this will not happen in the foreseeable future, and geologists have confirmed the safety of the plateau.

Access to Preikestolen from Stavanger is via the Norwegian National Road 13 (Rv13) and the ferry from Tau. From the south, access is by the Rv13 through Sandnes via the ferry from Lauvvika to Oanes. The road is usually open and the ferries running year-round. However, due to snow, it is not always possible to do the hike to the top in the winter. Lofoten is an archipelago in Norway. Its known for its dramatic scenery, with peaks like the Svolværgeita pinnacle jutting up into the sky. Himmeltindan Mountain sits on Vestvågøya Island. The nearby Lofotr Viking Museum features a Viking longhouse reconstruction. Cycle routes cover the islands, passing through fishing villages like Henningsvær, which has colorful buildings lining its waterways.

Lofoten (Old Norse: Lófótr) was the original name of the island Vestvågøya. The first element is ló (i.e., “lynx”) and the last element is derived from Norse fótr (i.e., “foot”), as the shape of the island must have been compared with that of a lynx’s foot. (The old name of the neighbouring island Flakstadøya was Vargfót, “wolf’s foot”, from vargr “wolf”.) Alternatively it could derive from the word for light in reference to the presence of Aurora Borealis as the word for light itself is the root of the Old Norse word for lynx lóa, although the earliest evidence suggests Lófótr was first the name of the island of Vestvågøy and only later becoming the name of the chain of islands. Most parsimonious is the analogy with Aurora Borealis, as the word fótr is typically not used to describe the feet of beasts of prey, instead using the word hrammr (paw) or löpp (also paw) for animals such as cats or dogs. Fótr can be used to describe legs, and as such, light leg represents the most plausible etymology taking into account the geography of the archipelago, eventually morphing to describe only the island of Vestvågøy before once again describing the island chain from its main island.

There is evidence of human settlement extending back at least 11,000 years in Lofoten, and the earliest archaeological sites … are only about 5,500 years old, at the transition from the early to late Stone Age.” Iron Age agriculture, livestock, and significant human habitation . Bygdøy or Bygdø is a peninsula situated on the western side of Oslo, Norway. Administratively, Bygdøy belongs to the borough of Frogner; historically Bygdøy was part of Aker Municipality and became part of Oslo in 1948.

Bygdøy has parks and forests, and beaches including the Huk ordinary and nudist beach. In 1885, there were only 111 houses at Bygdøy, but today, most of the huge gardens are split into smaller patches of land, making Bygdøy largely a residential zone but retaining a profile of upscale demographics. Bygdøy Royal Estate (Bygdøy kongsgård), the official summer residence of the King of Norway, and Oscarshall, site of the Queen Joséphine Gallery, are also located here. Large parts of the area such as the Bygdøy Royal Estate are protected from development.

The name is from Norse times (Bygðey). The first element is bygð ‘built district’ (= area with houses and population) – in Norse times this was the only inhabited island in the inner part of Oslofjord. The last element is ey ‘island’. (Bygdøy was originally an island, but it became a peninsula because of post-glacial rebound.)

The island belonged to the Cistercian monastery at Hovedøya, but it was confiscated by the Crown in 1532. The name was then changed to “Ladegaardsøen”. The first element in this new name was “ladegård” meaning “farm to give a manor (here Akershus fortress) income”. The last element “-øen” is the Danish finite form of “ø” or “island”. The old name was revived in 1877. It was first spelled “Bygdø”, but from 1918 officially spelled “Bygdøy”. However, the name Bygdø is preferred by many of its inhabitants and other West End inhabitants.

Bergen was established before 1070 AD. In the Middle Ages, the Bryggen area encompassed all buildings between the sea and the Stretet (Øvregaten) road, from Holmen in the north to Vågsbunnen in the south.According to the Sagas, the city was founded within this area.

One of the earliest pier constructions has been dated to around 1100, and the existing buildings are of a much later date, with only Schøtstuene and some buildings towards Julehuset being originals from 1702.

Around 1350, an office of the Hanseatic League was established in Bryggen. As the town developed into an important trading centre, the wharfs were improved and the buildings of Bryggen were gradually taken over by the Hanseatic merchants. The warehouses were used to store goods, particularly stockfish from northern Norway, and cereal from Europe.

Around 1350 a Kontor of the Hanseatic League was established there, and Tyskebryggen became the centre of the Hanseatic commercial activities in Norway. Today, Bryggen houses museums, shops, restaurants and pubs.

Oslo is the capital and most populous city of Norway. The municipality of Oslo had a population of 702,543 in 2022, while the city’s greater urban area had a population of 1,019,513 in 2019,and the metropolitan area had an estimated population of 1.71 million in 2010.Oslo was founded as a city at the end of the Viking Age in 1040 under the name Ánslo, and established as a kaupstad or trading place in 1048 by Harald Hardrada.The city was elevated to a bishopric in 1070 and a capital under Haakon V of Norway around 1300.

Oslo is the economic and governmental centre of Norway. The city is also a hub of Norwegian trade, banking, industry and shipping.Oslo is considered a global city and was ranked “Beta World City” in studies carried out by the Globalization and World Cities Study Group and Network in 2008.It was ranked number one in terms of quality of life among European large cities in the European Cities of the Future 2012 report by fDi magazine.There are 40 islands within the city limits, the largest being Malmøya (0.56 km2 or 0.22 sq mi), and scores more around the Oslofjord. Oslo has 343 lakes, the largest being Maridalsvannet (3.91 km2 or 1.51 sq mi). This is also a main source of drinking water for large parts of Oslo.

Oslo has many parks and green areas within the city core, as well as outside it. Frogner Park is a large park located a few minutes’ walk away from the city centre. This is the biggest and best-known park in Norway, with a large collection of sculptures by Gustav Vigeland.Bygdøy is a large green area, commonly called the Museum Peninsula of Oslo. The area is surrounded by the sea and is one of the most expensive districts in .

Oslo houses several major museums and galleries. The Munch Museum contains The Scream and other works by Edvard Munch, who donated all his work to the city after his death. 50 different museums are located around the city.In 2018 Oslo is named one of Lonely Planet’s Top Ten Cities. The travel guide’s best-selling yearbook Best in Travel has selected Oslo as one of the ten best cities in the world to visit in 2018, citing the Norwegian capital’s “innovative architecture and unmissable museums alongside cool bars, bistros and cafés. 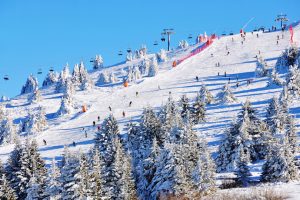