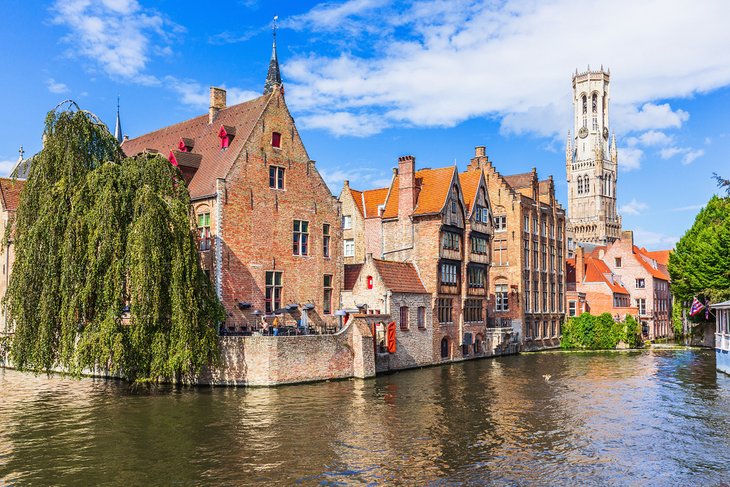 Belgium, a country in Western Europe, is known for medieval towns, Renaissance architecture and as headquarters of the European Union and NATO. The country has distinctive regions including Dutch-speaking Flanders to the north, French-speaking Wallonia to the south and a German-speaking community to the east. The bilingual capital, Brussels, has ornate guildhalls at Grand-Place and elegant art-nouveau buildings. The Grand Place’s construction began in the 11th century and was largely complete by the 17th. In 1695, during the Nine Years’ War, most of the square was destroyed during the bombardment of Brussels by French troops. Only the facade and the tower of the Town Hall, which served as a target for the artillery, and some stone walls resisted the incendiary balls. The houses that surrounded the Grand Place were rebuilt during subsequent years, giving the square its current appearance, though they were frequently modified in the following centuries. From the mid-19th century, the square’s heritage value was rediscovered, and it was thoroughly renovated.

Nowadays, the Grand Place is the most important tourist destination and most memorable landmark in Brussels. It is also considered one of the world’s most beautiful squares, and has been a UNESCO World Heritage Site since 1998.The square frequently hosts festive and cultural events, among them, in August of every even year, the installation of an immense flower carpet in its centre.It is also a centre of annual celebrations during the Christmas and New Year period, and a Christmas tree has been erected annually on the square since the mid-20th century.

2.The Canals of Bruges

ruges began on the banks of the river Reie, and as it grew, so did a series of waterways connecting it to the Zwin estuary and the North Sea.

Today, the canals are beautiful reminders of Bruges history, and taking a sightseeing cruise along them is one of the most popular ways to explore the city.

Sightseeing boat trips, departing from five docks, dotted along the main canal in the central city, run half-hourly from March to November (and less frequently in the depths of winter) with trips winding down the length of the main canal.

This is one of the best opportunities to get photos of both Bruges’ famous canal-side terraced house architecture and some of its finest buildings.

Tours run rain or shine, and umbrellas are provided by the tour boat operator when it’s raining. No reservations are taken for the public sightseeing boat tours – you simply turn up at the dock and buy your ticket as you board.

3.The Belfry of Bruges he Belfry of Bruges is a medieval bell tower in the centre of Bruges, Belgium. One of the city’s most prominent symbols, the belfry formerly housed a treasury and the municipal archives, and served as an observation post for spotting fires and other dangers.

The belfry was added to the market square around 1240, when Bruges was an important centre of the Flemish cloth industry. After a devastating fire in 1280, the tower was largely rebuilt. The city archives, however, were forever lost to the flames.

The octagonal upper stage of the belfry was added between 1483 and 1487, and capped with a wooden spire bearing an image of Saint Michael, banner in hand and dragon underfoot. The spire did not last long: a lightning strike in 1493 reduced it to ashes, and destroyed the bells as well. A wooden spire crowned the summit again for some two-and-a-half centuries, before it, too, fell victim to flames in 1741. The spire was never replaced again, thus making the current height of the building somewhat lower than in the past; but an openwork stone parapet in Gothic Revival style was added to the rooftop in 1822.

4.Basilica of the Holy Blood, Bruges The Basilica of the Holy Blood is a Roman Catholic basilica in Bruges, Belgium. The church houses a relic of the Holy Blood allegedly collected by Joseph of Arimathea and brought from the Holy Land by Thierry of Alsace, Count of Flanders.

The chapel of Saint Basil is one of the best preserved churches in Romanesque style of West Flanders Built from 1134 to 1149, the chapel is dedicated to St. Basil the Great of whom a relic was brought back by Count Robert II from Caesarea Mazaca in Cappadocia, Asia Minor (modern-day Turkey).

The chapel consists of two side naves and a central nave continued by the choir, which in turn is ended by a semi-circular apse. In the tympanum above the entrance linking the chapel and the annex is a 12th-century representation of the baptism of Saint Basil. In the right nave, the seated Madonna and Child (Sedes Sapientiae) is a wooden polychrome sculpture of the early 14th century. Carried each year during the procession, two venerated wooden statues, made around 1900 and representing Jesus on the Cold Stone and the Pieta are displayed. Mechelen lies on the major urban and industrial axis Brussels–Antwerp, about 25 km from each city. Inhabitants find employment at Mechelen’s southern industrial and northern office estates, as well as at offices or industry near the capital and Zaventem Airport, or at industrial plants near Antwerp’s seaport.

Mechelen is one of Flanders’ prominent cities of historical art, with Antwerp, Bruges, Brussels, Ghent, and Leuven. It was notably a centre for artistic production during the Northern Renaissance, when painters, printmakers, illuminators and composers of polyphony were attracted by patrons such as Margaret of York, Margaret of Austria and Hieronymus van Busleyden.

Most cities in Flanders have a mock name for their inhabitants. Since 1687, for their heroic attempt to fight the fire high up in the Saint-Rumbold’s Tower, where the gothic windows had shown the flaring of only the moon between clouds, Mechlinians have been called Maneblussers (moon extinguishers).

Once every 25 years, a Parade, the Ommegang, commemorates both the arrival of Holy Roman Emperor Maximilian I, father of Archduchess Margaret of Austria, and also other major events of the city’s past. The Ommegang had an extra edition in 2000 for the 500th anniversary of the birth of Charles V. This cortege shows the city’s six 15th–17th-century Giants and other serious and humoresque puppets and carts, all typically made on a huge scale, and has been UNESCO Masterpiece of the Oral and Intangible Heritage of Humanity since 2005. The Semois is a river flowing from the Ardennes uplands of Belgium and France towards the Meuse, of which it is a right tributary. The source of the Semois is in Arlon, Wallonia, in the Belgian province of Luxembourg, close to the border with the Grand Duchy of Luxembourg.

Other places on the banks of the Semois are Chiny, Florenville, Herbeumont, Bouillon (including the localities of Dohan and Poupehan), and Vresse-sur-Semois (all in Belgium).

The source of the Semois is in Arlon, Wallonia, in the Belgian province of Luxembourg, close to the border with the Grand Duchy of Luxembourg. Flowing in a roughly westerly direction, it enters France after passing through the Belgian village of Bohan-sur-Semois and forms about 2 kilometres (1.2 mi) of the Belgian–French border. It joins the Meuse 24 kilometres (15 mi) further downstream in Monthermé. The total length of the river is 210 kilometres (130 mi). The Castle of Vêves occupies a rocky platform in Wallonia just outside the village of Celles, in the province of Namur, Belgium. It is classified as Major Heritage of Wallonia.

According to tradition, the site has been occupied by castles since the time of Pippin of Herstal (7th century). In the later Middle Ages, the area fell under control of the Beaufort family, which oversaw the construction of a stronghold here in about 1230.

The present castle, in the form of an irregular pentagon and flanked by six round towers of varying size, dates largely from around 1410. Successive restorations modified especially the walls of the inner courtyard, one of which is lined with a distinctive half-timbered gallery of two levels, and another of which was given a red brick facade in the Louis XV style. The northern frontage is crowned with a small cupola containing a clock.

This fairy-tale-style medieval castle, flanked by round towers and with interiors decorated in a sumptuous 18th-century style, is one of the Namur province’s top tourist attractions.