Croatia, officially the Republic of Croatia, is a country at the crossroads of Central and Southeast Europe. It shares a coastline along the Adriatic Sea.

The area known as Croatia today was inhabited throughout the prehistoric period. Neanderthal fossils dating to the middle Palaeolithic period were unearthed in northern Croatia, best presented in Krapina.Remnants of Neolithic and Chalcolithic cultures were found in all regions.orthern Croatia. The most significant are Baden, Starčevo, and Vučedol cultures. Iron Age hosted the early Illyrian Hallstatt culture and the Celtic La Tène culture.

Much later, the region was settled by Illyrians and Liburnians, while the first Greek colonies were established on the islands of Hvar, Korčula, and Vis.In 9 AD, the territory of today’s Croatia became part of the Roman Empire. Emperor Diocletian was native to the region. He had a large palace built in Split, to which he retired after abdicating in AD 305.

During the 5th century, the last de jure Western Roman Emperor Julius Nepos ruled a small realm from the palace after fleeing Italy in 475.The period ends with Avar and Croat invasions in the first half of the 7th century and the destruction of almost all Roman towns. Roman survivors retreated to more favourable sites on the coast, islands, and mountains. The city of Dubrovnik was founded by such survivors from Epidaurum. 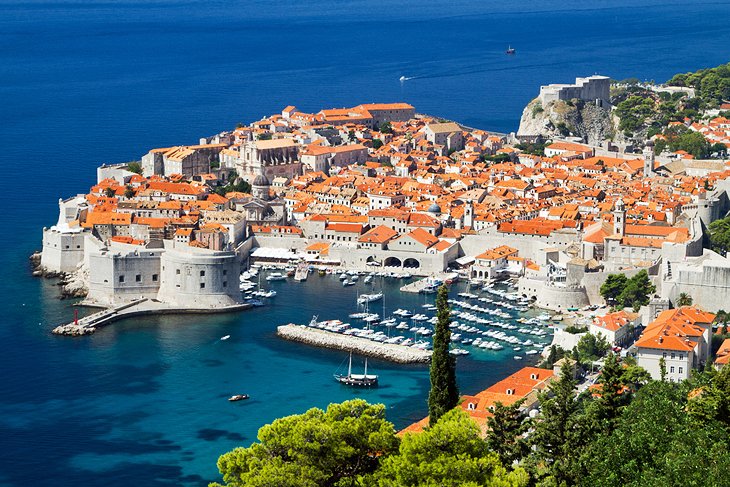 The oldest systems of fortifications around the town were likely wooden palisades. Today’s intact city walls, constructed mainly during the 12th–17th centuries,mostly a double line, have long been a source of pride for Dubrovnik. The walls run an uninterrupted course of approximately 1,940 metres (6,360 ft) in length, encircling most of the old city, and reach a maximum height of about 25 metres (82 ft). The bulk of the existing walls and fortifications were constructed during the 14th and 15th centuries, but were continually extended and strengthened up until the 17th century.

This complex structure, amongst the largest and most complete in Europe, protected the freedom and safety of the “civilised” and “sophisticated” Republic of Ragusa that flourished in peace and prosperity for some five centuries. The walls were reinforced by three circular and 14 quadrangular towers, five bastions (bulwarks), two angular fortifications and the large St. John’s Fortress. Land walls were additionally reinforced by one larger bastion and nine smaller semicircular ones, like the casemate Fort Bokar, the oldest preserved fort of that kind in Europe. The moat that ran around the outside section of the city walls, which were armed by more than 120 cannons, provided superb city defense capabilities. Diocletian’s Palace is an ancient palace built for the Roman emperor Diocletian at the turn of the fourth century AD, which today forms about half the old town of Split, Croatia.

The complex was built on a peninsula six kilometres southwest from Salona, the former capital of Dalmatia, one of the largest cities of the late empire with 60,000 people and the birthplace of Diocletian. The terrain around Salona slopes gently seaward and is typical karst, consisting of low limestone ridges running east to west with marl in the clefts between them. Today the remains of the palace are part of the historic core of Split, which in 1979 was listed by UNESCO as a World Heritage Site.

Diocletian had ordered the construction of the heavily fortified compound near his hometown of Spalatum in preparation for his retirement on 1 May 305 AD. The site chosen was near Salona, the provincial administrative centre of Dalmatia, on the southern side of a short peninsula, On the basis of Roman map data (known through the medieval parchment copy of the Tabula Peutingeriana), there was already a Spalatum settlement in that bay, the remains and size of which have not yet been established.
Reconstruction of Diocletian’s Palace in its original appearance upon completion in AD 305 (viewed from the south-west).

Plitviče Lakes National Park is a 295-sq.-km forest reserve in central Croatia. It’s known for a chain of 16 terraced lakes, joined by waterfalls, that extend into a limestone canyon. Walkways and hiking trails wind around and across the water, and an electric boat links the 12 upper and 4 lower lakes. The latter are the site of Veliki Slap, a 78m-high waterfall.

The national park is world-famous for its lakes arranged in cascades. Sixteen lakes can be seen from the surfaceThese lakes are a result of the confluence of several small rivers and subterranean karst rivers. The lakes are all interconnected and follow the water flow. They are separated by natural dams of travertine, which is deposited by the action of moss, algae, and bacteria. The particularly sensitive travertine barriers are the result of an interplay between water, air and plants. The encrusted plants and bacteria accumulate on top of each other, forming travertine barriers which grow at the rate of about 1 cm (0.4 in) per year.

The name Plitvice was first mentioned in a written document in 1777 by Dominik Vukasović, the priest of Otočac. This name was designated due to natural phenomena that have created the lakes. Nature formed shallow basins (Croatian pličina or plitvak, plitko means shallow), which have been filled with water. For centuries, water has changed the limestone and thus the landscape of this area. The emerging travertine barriers decelerated and retained the flowing water. These dams are continuously growing in height. Gornji Grad–Medveščak is one of the districts of Zagreb, Croatia; Gornji Grad translates as “Upper Town”, referring to its historical location on city’s hillside, being above Donji Grad.

The most important arterial road in Gornji Grad–Medveščak flows between its southern and northern border, starting as a narrow Ribnjak street alongside the Ribnjak park, then widening and changing name to Medveščak street until Gupčeva zvijezda, and again changing name in the north to Ksaver. The road is the main tram connection for Medveščak (lines 8 and 14). The district is also connected in its southern borders by many other important tram lines that run along Ilica, Jurišićeva and Vlaška streets. The short historic Zagreb funicular connects Lower and Upper town, and several less frequent (every 20–45 minutes) bus routes run through the hilly and less populated northern areas.

Here, popular tourist attractions include the cathedral with its neo-Gothic façade, twin steeples, and treasury with its large collection of religious art and artifacts; and the Croatian Parliament (Hrvatski sabor).

Also worth seeing are the Church of St. Mark with its famous colored tiled roof, and the 13th-century Tower of Lotrscak, which you can climb for fantastic views over the city and the surrounding area. Also be sure to catch most people’s favorite, the much-loved Museum of Broken Relationships. The arena had a total of 15 gates. A series of underground passageways were built underneath the arena along the main axis from which animals, ludi scenes and fighters could be released; stores and shops were located under the raked seating. The amphitheatre was part of the circuit of the gladiators.

Designed to host crowds of up to 20,000 people, it was used predominantly for entertainment such as gladiator fighting and jousting. Thanks to careful reconstruction, this impressive structure to this day can still host audiences of up to 5,000 visitors during its regular summer schedule of concerts and festivals. Zlatni Rat has been regularly listed as one of the top beaches in Europe. Its distinctive shape can be seen in many travel brochures, which made it one of the symbols of Croatian tourism. In 2008 Red Bull organized Red Bull Golden Jump, a unique kiteboarding competition in jumping/flying over the beach.

The pine tree grove which borders the beach is home to the remnants of a Roman villa rustica, which included a swimming pool. The westernmost edge of the beach, and several coves to the west of the main beach, are traditionally clothing-optional. The promontory is protected as a geomorphological phenomenon.

Extra attractions on the beach include water sports such as paddle boats, sea kayaks, and banana boat rides. Zlatni Rat is also Croatia’s top windsurfing destination. Brac is accessible by ferry and catamaran from Split.

A number of top luxury hotels are located nearby for those wanting to enjoy an extended stay here.

7.The Pretty Town of Korcula

The old city is surrounded by walls, and the streets are arranged in a herringbone pattern allowing free circulation of air but protecting against strong winds.Korčula is tightly built on a promontory that guards the narrow sound between the island and the mainland. Building outside the walls was forbidden until the 18th century, and the wooden drawbridge was only replaced in 1863. All of Korčula’s narrow streets are stepped with the notable exception of the street running alongside the southeastern wall. The street is called the Street of Thoughts as one did not have to worry about the steps.

The top points of interest include Marco Polo house, said to be the birthplace of the renowned 13th-century explorer, while one of the best things to do is catch a performance of the moreska sword dance, a traditional dance staged for tourists just outside the town walls on summer evenings.