Estonia, a country in Northern Europe, borders the Baltic Sea and Gulf of Finland. Including more than 1,500 islands, its diverse terrain spans rocky beaches, old-growth forest and many lakes. Formerly part of the Soviet Union, it’s dotted with castles, churches and hilltop fortresses. The capital, Tallinn, is known for its preserved Old Town, museums and the 314m-high Tallinn TV Tower, which has an observation deck.

Estonia is a developed country, with a high-income advanced economy; ranking very high in the Human Development Index. The sovereign state of Estonia is a democratic unitary parliamentary republic, administratively subdivided into 15 maakond (counties). With a population of just over 1.3 million, it is one of the least populous members of the European Union, the Eurozone, the OECD, the Schengen Area, and NATO. Estonia has consistently ranked highly in international rankings for quality of life, education, press freedom, digitalisation of public services and the prevalence of technology companies.

The earliest human habitation during the Mesolithic period is connected to the Kunda culture, named after the town of Kunda in northern Estonia. At that time the country was covered with forests, and people lived in semi-nomadic communities near bodies of water. Subsistence activities consisted of hunting, gathering and fishing. Around 4900 BC, ceramics appear of the neolithic period, known as Narva culture. Starting from around 3200 BC the Corded Ware culture appeared; this included new activities like primitive agriculture and animal husbandry. The earliest written record mentioning Kuressaare castle is from the 1380s, when the Teutonic Order began its construction for the bishops of Ösel-Wieck. Some sources claim that the first castle was built of wood. As the inhabitants of Saaremaa put up stiff resistance to foreign efforts to Christianise them, the castle was undoubtedly built as part of a wider effort by the crusaders to gain control over the island. From the outset, it was a stronghold belonging to the bishop of Saare-Lääne (German: Ösel-Wiek) and remained one of the most important castles of the Bishopric until its dissolution during the Livonian War.

One of the best-preserved fortifications in the Baltic region, the moat-ringed Kuressaare Episcopal Castle has been standing tall since the 1380s. You can spend the entire day soaking up the castle’s Gothic atmosphere and wandering around its many unique spaces, including the convent building; steep staircases; central courtyard; cloister; refectory; and the bishop’s living quarters, where 11 Baroque wood carvings are on display. Take in glorious views over a tasty lunch at the Tower Cafe.

The on-site history museum sheds light on what life was like during the time when this castle was in use many centuries ago through displays of one-of-a-kind artifacts (like more than 2,000 antique coins from as far back as the 1620s). Tourists can also watch and participate in traditional activities, like archery, pottery making, musical performances, and firing Estonia’s oldest working cannon, mostly during the busy summer months.

Vanalinn is a subdistrict in the district of Kesklinn, Tallinn, the capital of Estonia. It has a population of.

Whether your visit to Estonia is a full-fledged vacation or just a one-day stop on a Baltic cruise, you should spend as much time as your schedule allows touring Tallinn’s Old Town. It’s one of the world’s most pristinely preserved Hanseatic town centers and was home to wealthy merchants from Denmark and Germany in the 13th century. The Old Town, with its cobblestone streets and medieval churches, became a UNESCO World Heritage Site in 1997.

Start your journey at Raeapteek, one of Europe’s oldest continually-running pharmacies. It has fascinating museum-like exhibits on antique medical tools and techniques. Head outside to the center of the Town Hall Square and look for the distinctive circular stone. From that point, you can try to spot the steeples of Tallinn’s five historic churches.

During World War II, notable destructions took place in 1944 during so-called March Bombing (Estonian: märtsipommitamine). About 10% of the buildings in the Old Town were destroyed. The main attraction in the museum is the 1936 submarine Lembit, which was ordered by Estonia from the United Kingdom, and has nowadays been renovated to its original 1930s appearance. The museum also has a yellow submarine, which can be used to familiarise oneself with piloting a submarine, and a full-scale replica of a World War I era Short Type 184 seaplane. None of the original seaplanes remain to this day. The wreck of the wooden ship Maasilinn dates to the 16th century and had sailed between Saaremaa and mainland Estonia.The icebreaker Suur Tõll originally sailed for Finland under the name Wäinämöinen. It was conquered from the Russians near Helsinki in 1918 and donated to Estonia from Finland in 1922 according to the Treaty of Tartu.

There is also a special exhibit illustrating the background to the sinking of the MS Estonia ferry in 1994.

The attractions in the museum are located in three levels: in the air, on the sea and below the sea. The museum presents the history of the old maritime country Estonia in a modern visual language. The museum has submarine and flight simulators, and a pool where people can sail miniature ships and look at aquatic animals.

This attraction includes a 1930s-era submarine, 100-year-old steam-powered icebreaker, and the remains of the oldest ship in Estonia in the museum’s permanent collection. You can also try on a navy uniform for a souvenir photo and learn the art of folding paper airplanes. 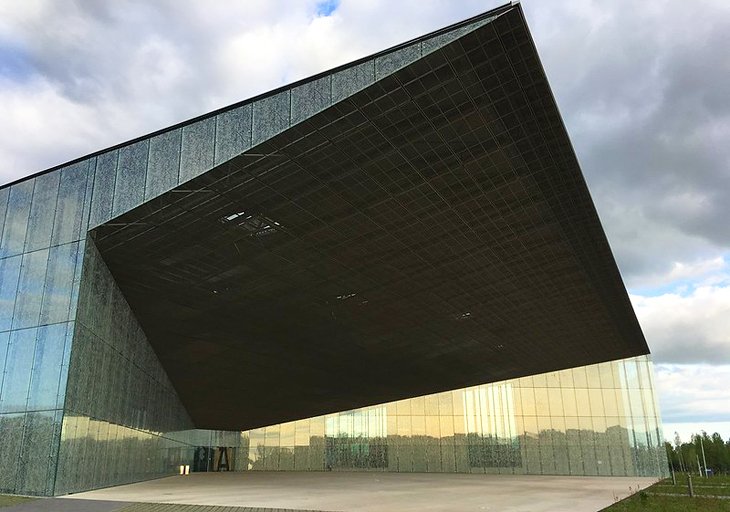 The Estonian National Museum (Estonian: Eesti Rahva Muuseum) founded 1909 in Tartu is a museum devoted to folklorist Jakob Hurt’s heritage, to Estonian ethnography and folk art. The first items for the museum were originally collected in the latter part of the 19th century.

The museum tracks the history, life and traditions of the Estonian people, presents the culture and history of other Finnic peoples, and the minorities in Estonia. It has a comprehensive display of traditional Estonian national costumes from all regions. A collection of wood carved beer tankards illustrates the traditional peasant fests and holidays. The exhibition includes an array of other handicrafts from hand-woven carpets to linen tablecloths.

Give yourself at least half a day to explore the treasures inside the museum. The main permanent exhibition, “Encounters,” allows tourists to peek into the lives of ordinary Estonians and their culture from the Ice Age to the modern day. “Echo of the Urals,” the other permanent exhibit at this museum, focuses on the Finno-Ugric peoples. It includes a stunning display of cultural clothing and daily tools, like cooking utensils. High-tech installations throughout the museum make the experience even more interactive. Matsalu Bay is one of the most important wetland bird areas in Europe, due to its prime position on the East Atlantic Flyway. Large numbers of migratory birds use Matsalu as a staging area. Every spring over two million waterfowl pass Matsalu, of which around 1.6 million are long-tailed ducks. Think the art of print and typography is lost in the digital age? Think again. Estonia keeps this cherished tradition alive at Typa, a private museum-studio in Tartu.

Formerly known as the Estonian Print & Paper Museum, Typa displays a range of historical printing machinery and paper-making equipment that will make you fall in love with the printed word once again. Tourists will see a mesmerizing array of letterpress alphabets in every style imaginable, sure to blow design lovers away.

Typa also offers a range of workshops that will allow you to try your hand at creating a notebook using a 150-year-old hand press, making paper from pulp, or designing a linocut print. Or, commission a custom diary, print, or album from the pros on staff. 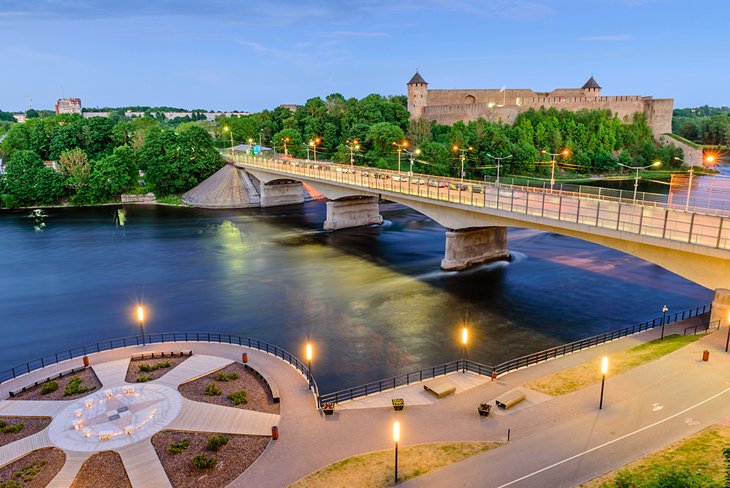 The Narva river has its source at the northeastern end of Lake Peipus, near the villages of Vasknarva (Estonia) and Skyamya (Russia). There are a few more small villages on the upper section of the river, for example Permisküla and Kuningaküla on the Estonian side and Omuti on the Russian side, but up to the city of Narva the shores of the river are mostly forested or marshy land. The river is dammed entering Narva and Ivangorod, forming the Narva Reservoir, which extends up to 38 kilometres (24 mi) upstream.The Narva empties into Narva Bay near the Estonian town of Narva-Jõesuu, third largest settlement on the river after Narva and Ivangorod.

The Plyussa is the largest tributary, joining the Narva at the Narva Reservoir from the right.

No matter where you are on the serene promenade, you’ll find something interesting and beautiful to see. Toward the west, you can check out the bastion walls and the Hermann Castle, a 14th-century stone structure. The Narva harbor stands prominently north of the promenade. And in the south, tourists can visit the Joaorg recreation area, which has a beach house and fantastic architecture. 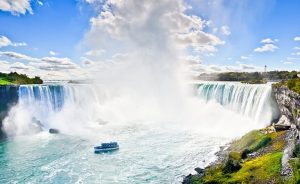